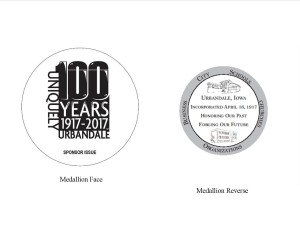 For a limited time, the Urbandale Centennial Committee is offering for sale highly collectible “Sponsor Issue” medallions that commemorate the city’s 100th anniversary in 2017.

“There are numerous ways residents can participate in the medallion program,” said committee co-chair Scott Raecker. “In addition to the exclusive sponsor edition medallion we will have additional medallions limited in number as well as commemorative medallions that individuals and business may want to buy.”